A Year To Always Remember


This morning while I was sitting in my rocking chair, rocking my sweet little Ellie, I started to think about this past year and all that it has brought us.

This year has been a year of: life and death, a funeral and a homecoming,  sorrow and joy, answered prayers and some prayers not answered the way we had hoped, lessons learned, new friends made, and so much more.

2012 has by no means been an easy year. It has without a doubt been the hardest year of my life, but yet as the year comes to an end I find myself very thankful for a special little someone who blessed us with her presence this year.

The year started out in complete and utter devastation when Robby died. I didn’t think that we could ever continue on without our precious little Robby. When we lost Robby I truly learned that life is not fair and that as much as you want something, sometimes it just does not happen. God has a plan and only He knows what it is.

While I was in the hospital laboring with Robby I spent so many hours pleading with God to please let us keep Robby, but in the end I had to accept that we live in an imperfect world where bad things happen. It wasn’t the doctor’s fault, God’s fault, or even my own fault. It was a product of us living in a sinful and imperfect world.

Having to hand Robby over to the nurse after he died was truly the low point of my year. Even though I have learned to deal with Robby’s death I have not “moved on.” As I have said in blog posts before I will never move on from Robby because he is a part of who I am- he makes up a large part of my story.

When I got pregnant with Ellie things started to look up for us. I made it past 23 weeks and we were starting to feel comfortable with the possibility that I could make it at least until Thanksgiving with Ellie, but Ellie had plans of her own and graced us with her presence three months early!

Ellie’s birth was by no means the picture perfect birth, but what I had to keep reminding myself when I was in the OR was that Ellie was 26 weeks and she had a great chance of not only surviving, but thriving. We had a rocky start in the NICU when Ellie got pneumonia and was on the ventilator for 5 weeks. There were days that she struggled so much, and I wasn’t sure that she would make it, but our little princess pulled through and surprised everyone! As Dr. Hsaio said "Ellie is kick a**."

I truly did learn about the power of prayer while Ellie was in the NICU. Shortly after Ellie was born my mom started a facebook group to keep family and friends updated on Ellie’s progress. Well, little did we know- Ellie’s group grew to over a thousand people! I never dreamed that there would be so many people out there “Loving Ellie.” I have to say, I have been overwhelmed with gratitude to all of the people out there who have become invested in Ellie, people who faithfully pray for Ellie, people who have cried with us on the rough days as well as cheered us on with each victory- big or small. Ellie's group is a great reminder that there is power in prayer!

As the year ends I can’t look back on the whole year and say that it was an amazing year, but I can say that I am extremely thankful that in the midst of our storm, a beautiful rainbow blessed us.

For those of you that don’t know, a rainbow baby is the name that is given to the baby born after a loss. It is understood that the beauty of a rainbow does not negate the ravages of any storm. When a rainbow appears, it does not mean that the storm never happened or that we are not still dealing with its aftermath- it means that something beautiful and full of light has appeared in the midst of the darkness and clouds. Storm clouds may still hover, but the rainbow provides a counterbalance of color, energy and hope. Ellie is the true definition of a rainbow. She has brought so much light and hope into our lives, and for that we are thankful.

I wish that Robby could be here to be an earthly big brother to Ellie, but that is not an option. Ellie has a wonderful big brother up in heaven who is always watching over her, rooting for her, and sending her love.

I am thankful that Ellie is here to help us ring in a new year and I plan to spend each and every day enjoying every moment.

“Do not dwell in the past, do not dream of the future, concentrate the mind on the present moment.”
~Buddha 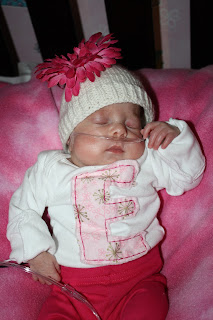