A Blast From The Past

A few nights ago after Ellie had gone to bed, my mom and I were watching television and doing some Facebooking while Tanner was still at work. My mom ran across a local listing for a 1985 new in box Cabbage Patch doll. I was interested mainly because it was a Cabbage Patch doll. When I was a little girl my parents took me to The General Nursery in Georgia where I adopted my very own Cabbage Patch doll from Mother Cabbage. It was one of my favorite baby dolls.

We do not refer to Ellie as a preemie (or more specifically a micro preemie) anymore, but, she once was a little preemie so this is part of her story and will always be a part of her and I thought it would be fun for her to have a special preemie Cabbage Patch baby doll. Although this baby doll had been packaged nicely, never opened or out of the box,  and not touched for 30 years, as soon as we got home Ellie and I got into the box and pulled her out! Tanner thought that we should leave her in the box as an “investment,” but Ellie and I wanted to open her up and give this little Cabbage Patch preemie some love. 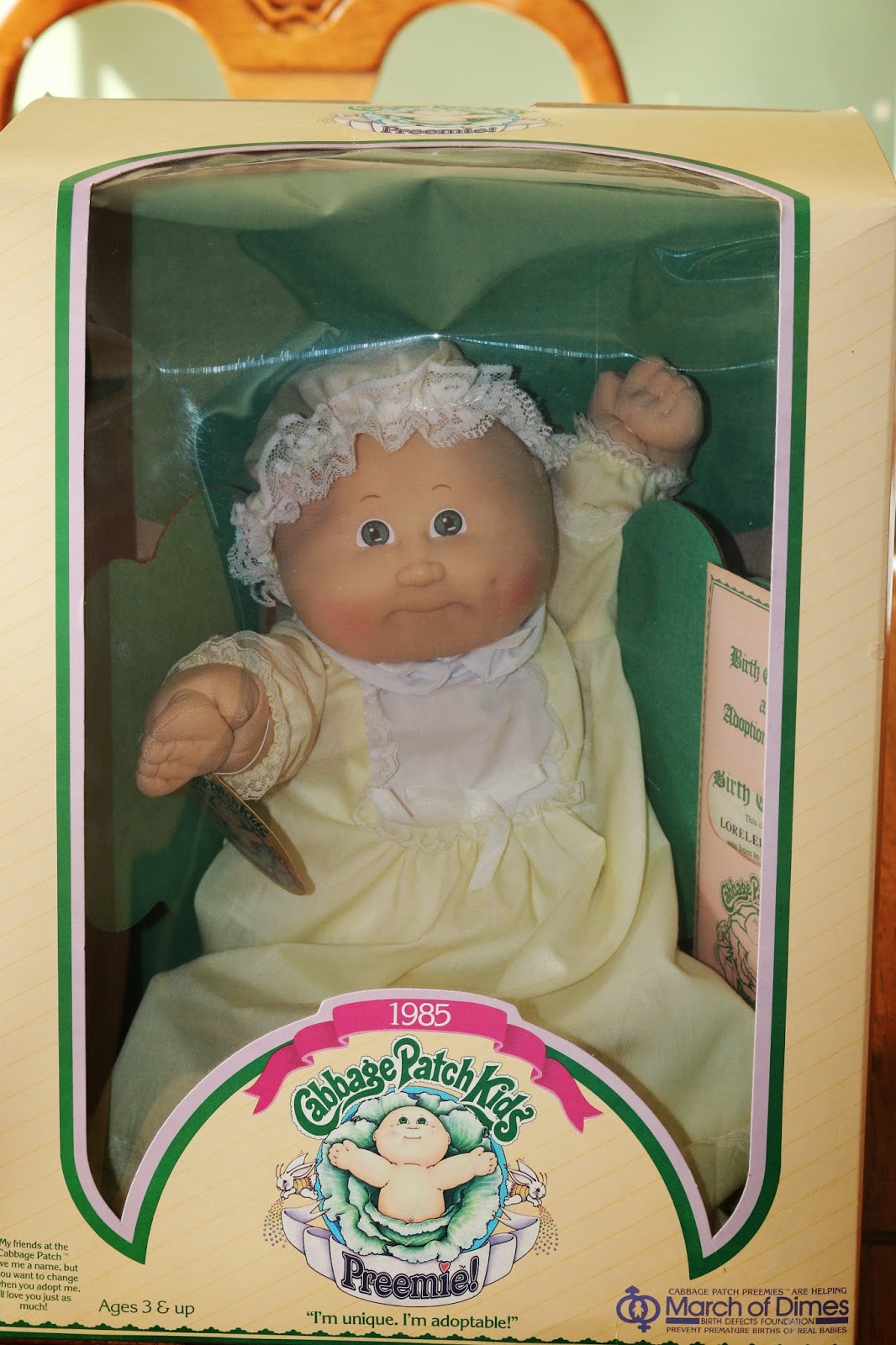 Tucked inside the box with “Lorelei” was an envelope of adoption papers as well as a pamphlet from the March of Dimes titled “What is a Preemie.”


Although this was written thirty years ago, it managed to tug at my heart strings and make me cry.


The pamphlet talked about the “legend” of the Cabbage Patch Preemies as well as talked about what a preemie is. 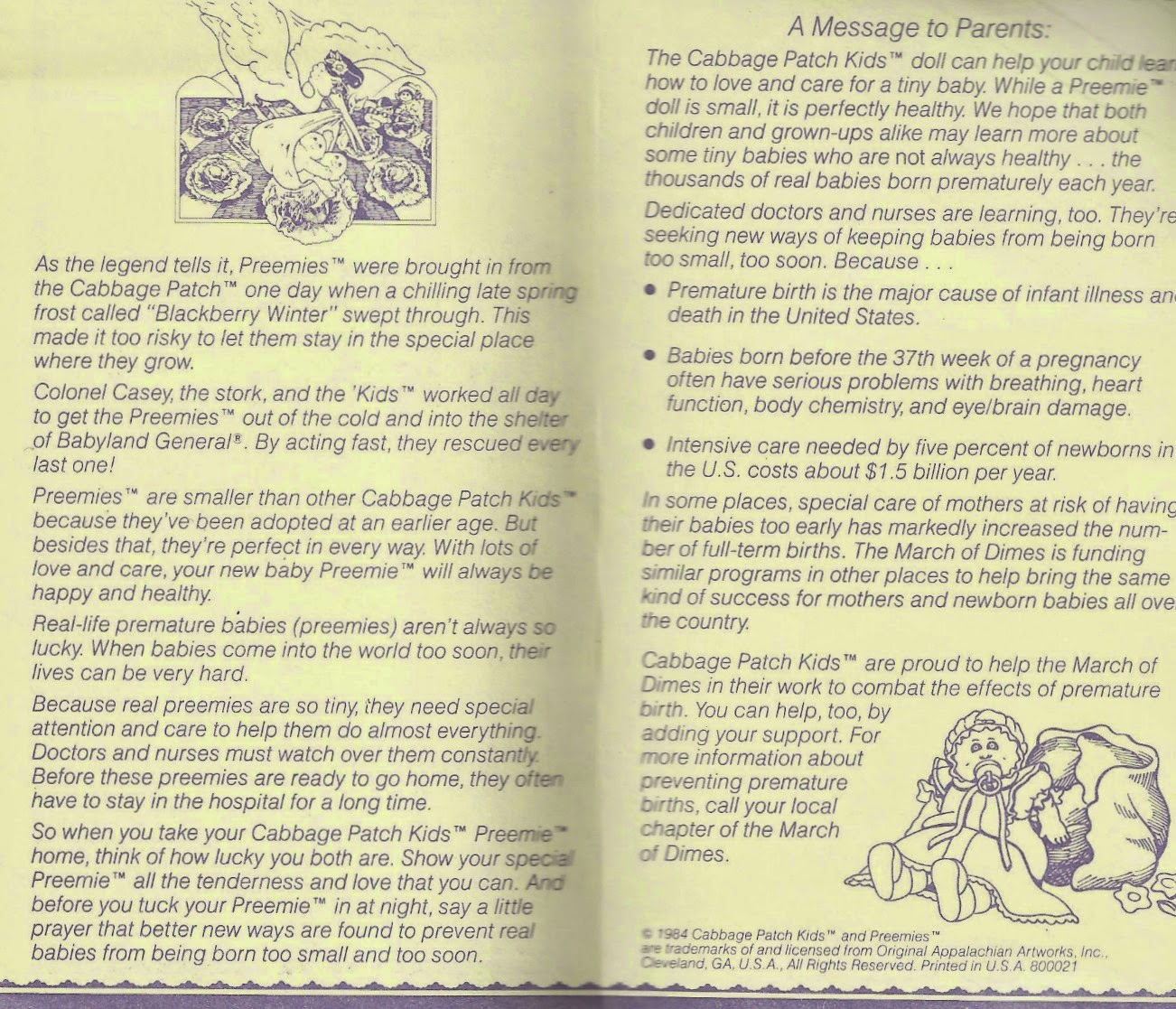 One of my favorite parts of the pamphlet was this:


“Preemies are smaller than other Cabbage Patch Kids because they’ve been adopted at an earlier age. But besides that, they’re perfect in every way. With lots of love and care, your new baby Preemie will always be happy and healthy. “


When full term babies are born, one of the most common things to say to the new parents is that their new baby is “perfect.” When Ellie was born, we heard  many very nice things, but there were very few people that ever said that she was perfect. All babies are perfect, even if they are born early. I truly believe this. Both of my babies, Robby and Ellie, were/are perfect. Premature babies are absolutely perfect, and I love that this pamphlet made it very clear that although the baby was small and early, it is still perfect. 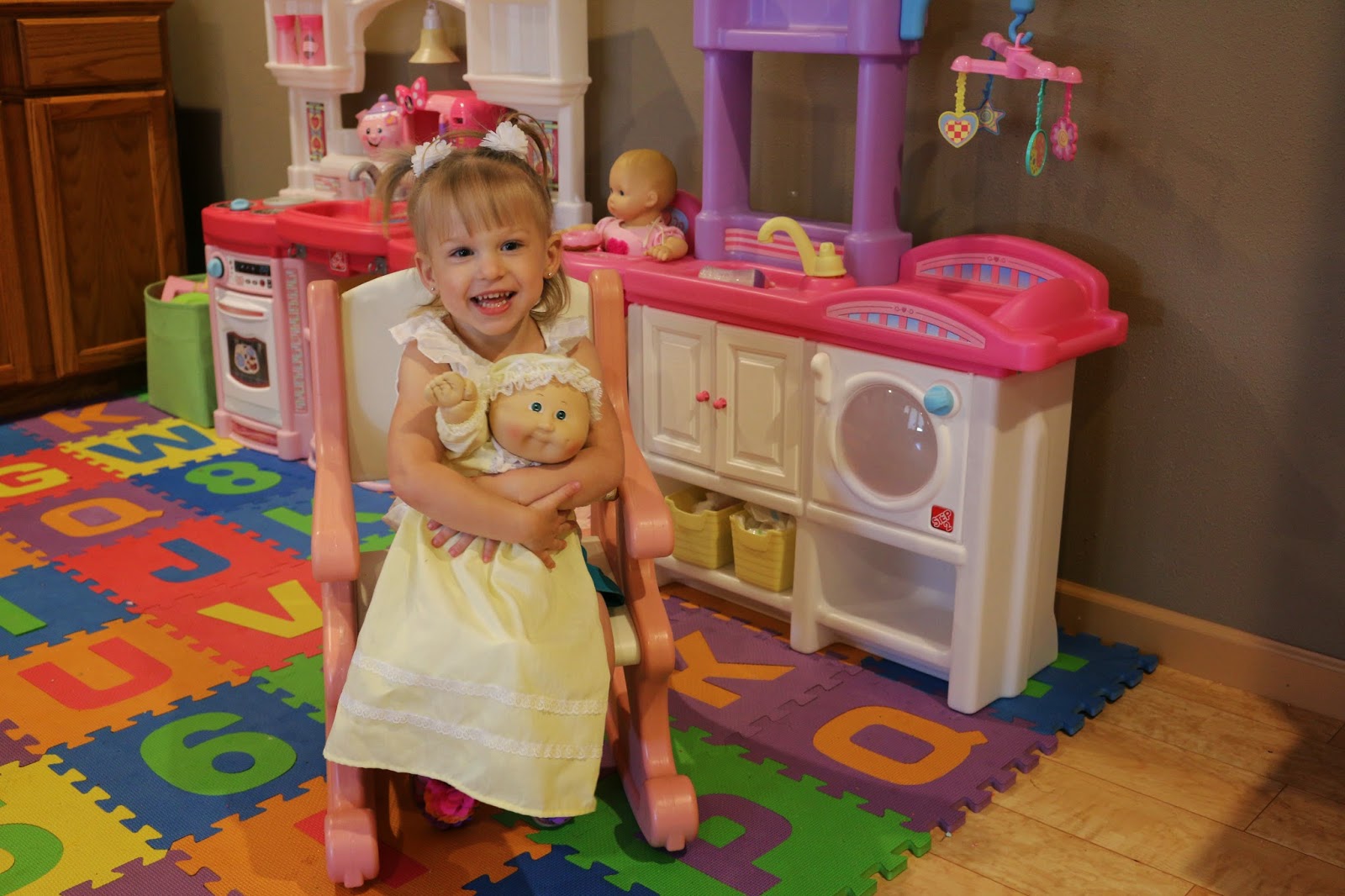 I tried to find some more information about the partnership between the Cabbage Patch dolls and March of Dimes, but I found very little on the subject. However, I did find that the reason that the March of Dimes wanted to partner with Cabbage Patch Dolls was to make sure that nobody thought they were making being a preemie into a lesser deal than what it is. There can be a fine line between shedding light on something so serious as a premature birth, and making it into something that appears it to seem like not a big deal. I think that the pamphlet that went in with the dolls was a perfect touch to help spread awareness about premature birth.


Premature birth is something that is very real to my family. It has affected us in the most powerful ways. There have been so many advances that have been made in premature birth prevention since 1985, yet there is still so much more to learn.


Every several months I see a certain image make its way around Facebook. I have seen friends as well as family members post this. The thing about Facebook is that even though information posted might not be true, it still can spread like a wildfire. 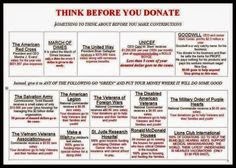 It makes my heart sad that there are people out there who would stop giving to certain charities such as The March of Dimes because of an inaccurate poster like this. Although I do wish that more money could be going specifically to research for the March of Dimes, the fact is that these places do need funded, and not all of donation  money can go directly to research. If it weren't for the funding and research, then Ellie might not be alive, and there certainly would not be any hope for a preterm labor solution.
Click HERE to see an excellent rundown of where all of the March of Dimes money goes.


The March of Dimes is responsible for the technology and advancements that saved Ellie’s life, and it is my hope that with more research funded by donations, they can continue to make even more advancements so that more babies can be saved. Although so many babies are saved and healthy, there are still so many babies, like Robby, who just could not be saved. The March of Dimes funds research that will hopefully find the cause of premature labor. 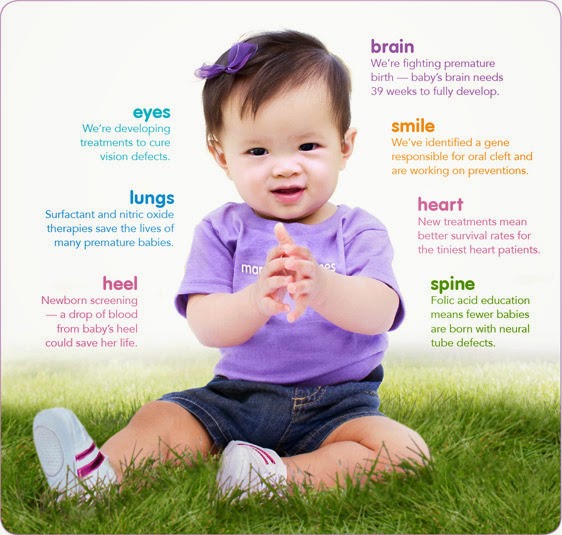 We have not ever actually participated in our local March for Babies, but it is something that I am passionate about and plan to do someday. Since Ellie was born, we have had several people walk in Ellie’s honor to raise money for the March of Dimes! We are so thankful to those friends and family members who did something special in Ellie’s honor! This year we are focused on Project Robby, so we didn’t feel like this was the year to start a team for March for Babies. I am positive that at some point in the future we will put a team together and walk.


Although we do not have a team set up, I have a dear friend who does. One of the first connections I made with a fellow loss mother after Robby’s death was Karin who lost her little boy, Nathaniel a few months before we lost Robby. Each year they have a team that walks in honor of Nathaniel. Please consider donating to Team Nathaniel this year as they hope to raise $10,000.00 in his honor. Click HERE to donate to Team Nathaniel. 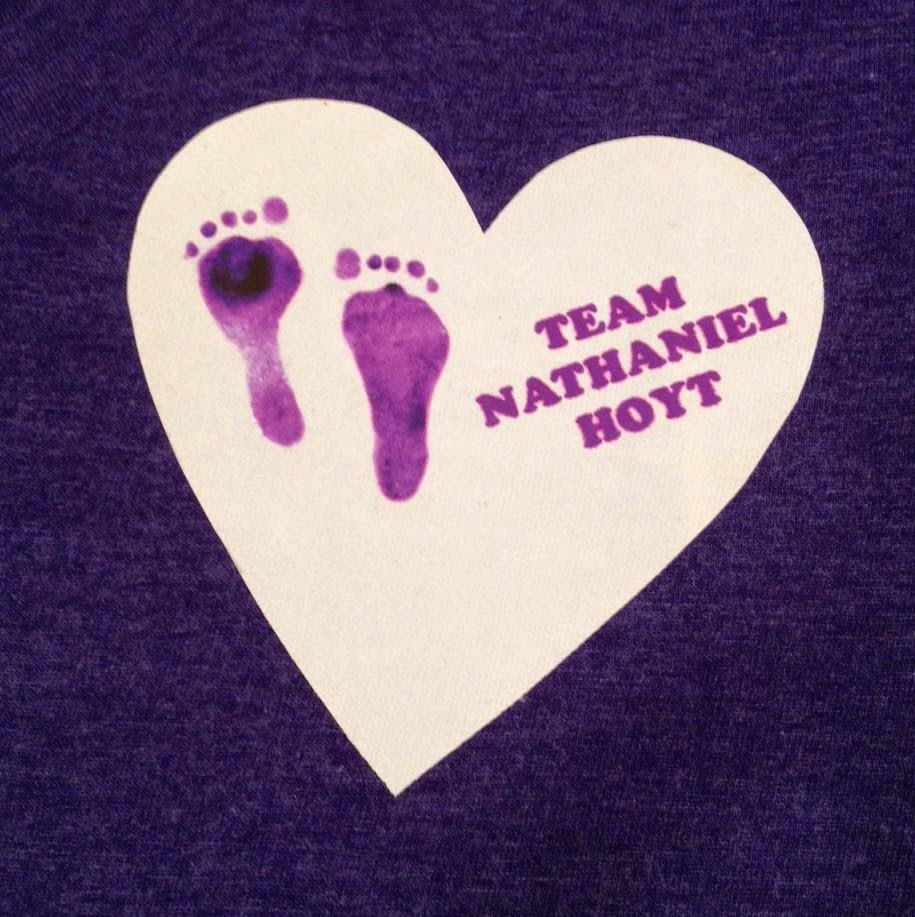 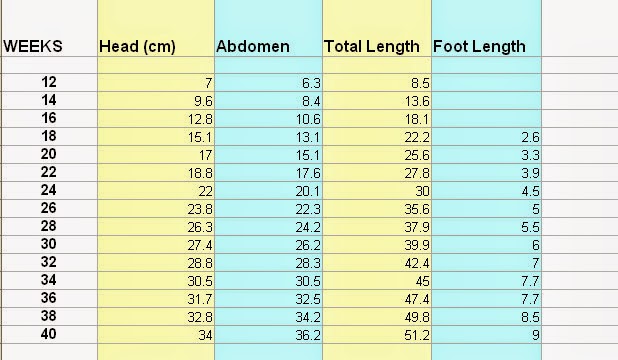