What A Difference A Year Makes: Happy Birthday Ellie!

Last night as I rocked my sweet little girl for the last time before she turned one, I thought about all that she has been through this past year, and how far she has come. 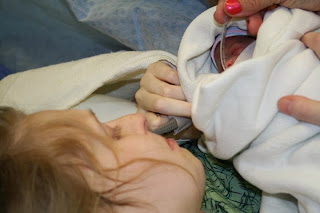 One year ago I was terrified for her. I was scared that she wouldn’t ever come home with us. 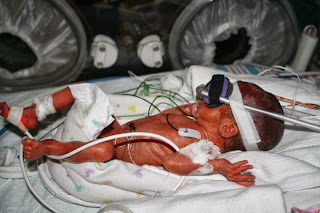 Through her first seven weeks I was scared. I was scared that she was going to die. It took the doctors and nurses 49 days before they were able to tell me that she would in fact be okay and would eventually go home with us. 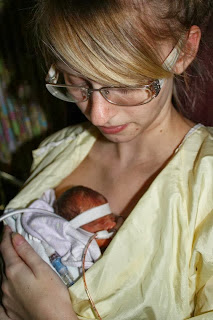 When I was in the hospital contracting on October 15, 2012, Dr. Hsaio came to introduce himself and tell us a little bit about what would happen if I were to deliver Ellie that night. He stood there and talked about all of the things that could potentially go wrong with Ellie. The picture that he painted for us was very grim, and I know that he had to do that to prepare us for what could happen. 1 in 10 premature babies develop a permanent disability. He said that she is at a very high risk for a severe brain bleed, cerebral palsy, blindness, deafness, Chronic Lung Disease and so many other things. This is what I was told just an hour before they wheeled me back into emergency surgery to deliver Ellie. 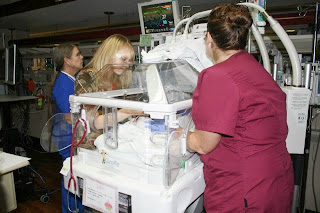 It was the scariest 49 days of my life. For those 49 days we sat by Ellie's isolette and stared at it. There were a lot of days we weren’t even able to open up the curtain that covered the isolette to look at Ellie other than at diaper change time. It all depended on the day and how she was doing. So, if it was a day that we needed to let her rest in quiet and darkness then we just sat and looked at the isolette and prayed. 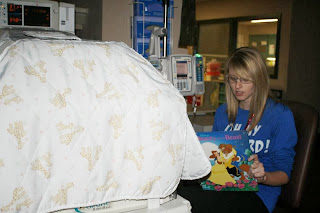 During those 49 days we watched her struggle to breathe. She was what they called a “swinger” which means her oxygen would jump from high to low back up to high. We would watch her numbers and listen to the bells and whistles go off when her oxygen was too low. The nurses would sit close by so that they were able to easily adjust the oxygen up or down depending on how she was doing. 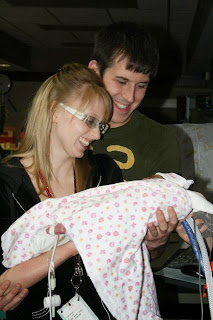 Since she required so much oxygen, I was unable to hold her for the first several weeks. To be able to get her out to hold, her oxygen needed to get below 30. Each night when I went home I would call several times throughout the night and the early morning to check on Ellie. The two questions I would always ask were: "What is her oxygen at?" and "Has she had any bradys?" 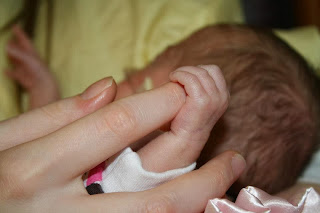 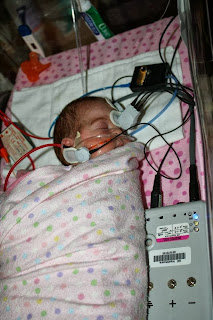 One night at my 3:00 am call to the hospital the respiratory therapist that was on duty that night got on the phone to talk to me and sounded ecstatic because they were able to get her down to 28% oxygen for a few minutes. She knew how desperately I wanted to hold my baby and so she wanted me to know that they were working hard at getting her oxygen low enough for that to happen. 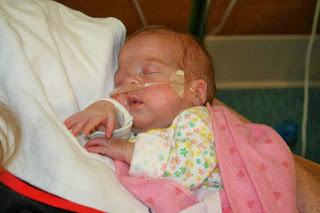 Ellie was in the hospital for a total of 65 days, and at the time those days went by so slowly. It seemed as if the day was never going to come that she would be our “take home baby.” 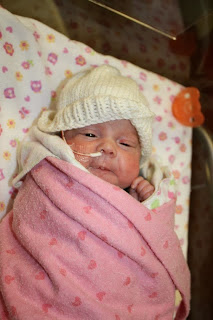 After 65 long days of being in the hospital, we finally got to bring her home, and since then, the time has gone by so very quickly. 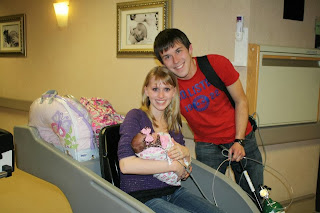 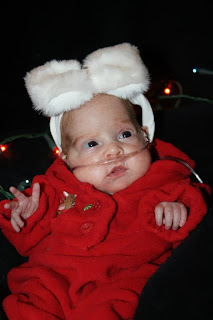 This past year I have tried my hardest to savor every single moment with Ellie. Each tear, each and every middle of the night feeding, the spitting up, and even each teething poop, I have savored because we will not ever get this back. 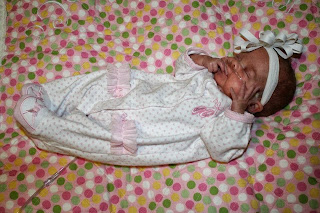 Ellie has made it through so much this past year. She overcame having pneumonia, her ROP has resolved, her brain bleed resolved, and she stopped needing oxygen at 4 months old. 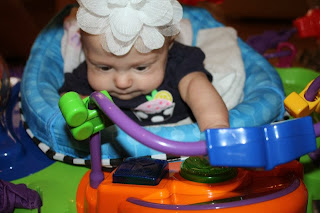 In her admittance papers to Wesley, the nurse wrote down that she looked: “Quiet, depressed, and floppy.” One year later, she is Loud, happy, and we can’t get her to sit still! 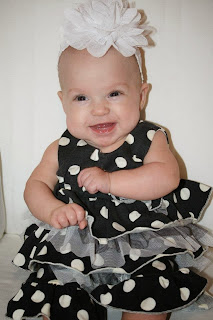 When looking at her today, the only signs still visible from being a micro preemie are the scar on her chest where her CVC was placed, the scars on her heels from the dozens of heel pricks she endured, and two tiny spots on her head where hair does not grow due to the tape from the ventilator. 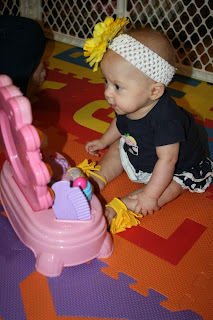 The one thing she has not yet overcome is her Chronic Lung Disease. Her lungs are still very fragile. Sometimes it is hard to remember that they are still so fragile, because she looks like a completely healthy baby. If she gets sick this year it will not be quite as bad as it would have been if she had gotten sick last year because she is bigger now- her lungs have grown. However, it will still be difficult for Ellie because of the Chronic Lung Disease and that is why the doctors, nurses, and respiratory therapists at the hospital recommended being extra cautious with Ellie during her first two RSV seasons. Although Chronic Lung Disease can be, and is, very serious, we are thankful that this is her only lasting condition from being a micro preemie at 1 pound 12 ounces at birth. 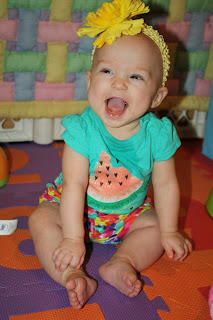 I cannot even begin to express how thankful I am for all of the support that we have had this past year. All of the prayers have been deeply and sincerely appreciated. I truly believe that it was all of those prayers that got Ellie and us through her NICU stay. 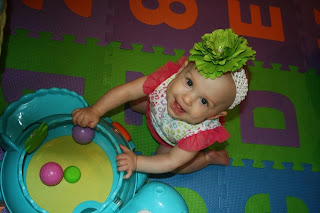 I have recently gone back through each and every one of the updates that my mom made on the Loving Ellie page. It is absolutely amazing to go back through and see all of the comments, love and concern from everyone, and it just brought me to tears. Thank you so much to everyone who has been “Loving Ellie” this past year. We are so lucky to have such amazing family and friends. 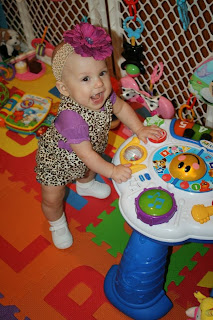 On the night that Ellie was born, I was scared, and I didn’t know what was in store for us, but tonight- one year later- I am not scared, but thankful. Thankful that despite the rough start Ellie had to her first year of life, that she is now healthy, happy, and thriving. In the past couple of weeks several people have asked me if I am sad that she is about to turn one, and I always respond that her birthday is nothing to be sad about. Ellie’s birthday is something to celebrate and praise God for. I tell them that you should never be sad that your baby is growing up, be glad that they have to opportunity TO grow up. 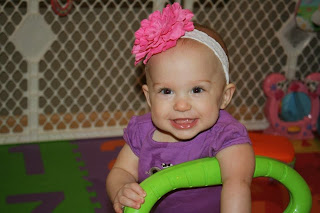 Ellie’s first 65 days of life was scary. I remember the night that I was discharged from the hospital, my mom and I stayed even though we did not have anywhere to sleep other than hard chairs. We carried everything we needed with us in backpacks. I remember asking her that night how we would make it through. She told me “I don’t know, but we will figure it out, and we will get through this.” 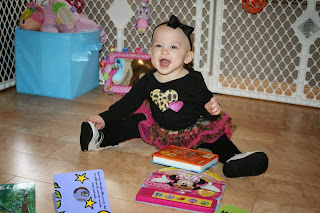 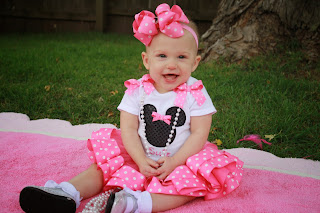 Happy 1st Birthday Princess. Although your first year started out rough, you were a strong little fighter and have made it though. We have made it through with the help of God, family, friends, and many prayers. We are all stronger because of it. You bring us happiness and joy every single day. It brings me so much joy to be able to watch you grow and learn new things. You are beautiful and perfect, and you have been since the night you were born. You truly are our shining rainbow of hope, and I love you so very much. 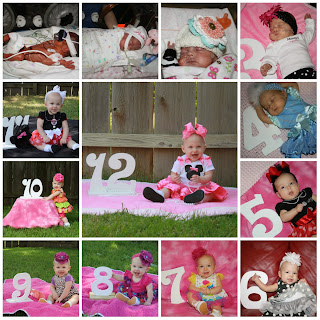