The Love of a Parent is Forever

Holidays are difficult when you have lost a loved one. Of course every single day is difficult, but holidays seem to really be a kick in the gut. It is a time of love, laughter, and family. However, when part of your family is missing, it makes things a little (okay, a lot) sad.


When we were Christmas shopping earlier in the month, Ellie told me that she needed to buy Robby a present, so she picked out a small matchbox car. Ellie is three, and is really into every aspect of Christmas this year, so she also insisted that we wrap it up for him.


On Christmas Eve we went out to the cemetery where Robby is buried.  Ellie unwrapped Robby’s present, and played with the little red car on his stone. She had received a package in the mail  from Santa the day before, which included snow from the North Pole and some Reindeer food to sprinkle in the yard before bed on Christmas Eve. Ellie pulled both containers out of her Minnie Mouse backpack that she had packed up and then she “showed” them to Robby. She very carefully took the lid off of the snow, put her little fingers in the container,  pulled out some “snow”and then sprinkled it on his stone. She told Robby that Santa sent her this snow from his house. Then she opened up the reindeer food and did the same thing, as she let Robby know that now Rudolph would know where to find him. It broke my heart yet made my heart full all at the same time knowing that she wanted to “share” with her big brother. Her brother whom she has never actually met. 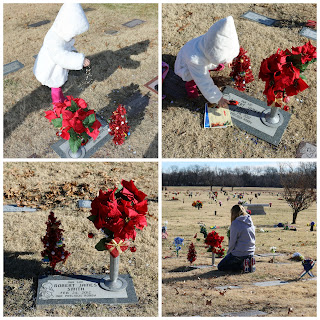 When we go to visit Robby, I like to walk around Babyland and look at the different things that are out for the other angel babies. I  talk with Ellie about the different decorations that are out, and we say some of the baby names out loud. I like to say and hear Robby’s name said out loud because it validates his existence to me, so it has become natural to do the same for other angel babies as well. This year, I noticed several different stones that were decorated for Christmas. They were stones of babies who were born many years ago. These babies were born in 1980, 1986, 1992 and 1993. The 1992  really hit home for me because I was born in 1992. These parents,23 years later, still come to their angel baby's grave and put out Christmas decorations. 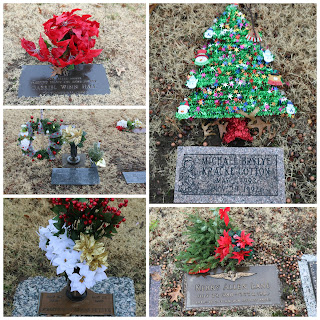 
I cried because this Christmas and every Christmas for as long as I live, I won’t ever get to see my little boy’s eyes light up on Christmas morning while opening presents.


I cried because he won’t ever have a picture with Santa.


I cried because the love of a parent is forever.


I’m praying for all of the parents who have suffered a loss- whether it has been a recent loss, or it has been many years. A loss is difficult whether it is new or old because  the love of a parent is forever.

As long as I'm living,